Of Sharks and Dolphins

Recently one of my clients left a five-star positive Google review that contained the following language amongst general praise: “If you are looking for an amoral shark to punish your not-yet-ex for sins both real and imagined, this isn’t the law firm for you, but I strongly recommend Carl Taylor Law to everyone else.”

The Review That Molded Our Values 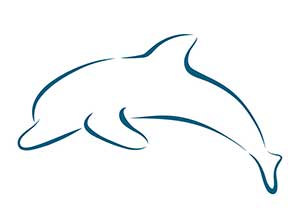 I went home that evening and read those lines over and over again.  I read them to my wife and asked her input.  Although it was a positive review*, I was a little concerned.  Because of course, lawyers have large egos and I am no exception.  You want to be moral, but you also want to be a shark, or at least viewed that you have some shark in you.  Moreover, it’s what many clients expect—even demand. They are paying good money and they think that’s what they should be paying for.

Somehow, despite being personally stubborn, occasionally ill-tempered, and when appropriate quite aggressive, this review was similar to other feedback I have received throughout my career. Often times that feedback is positive: “you were a pleasure to work with,” clients may say. Or “you were tough when necessary but I appreciate your being logical and having a steady-hand during my divorce case.”  Other times the comments have been a bit more pointed: “You do have it in you to be a real mean bastard, right?” at least three clients have asked me over the years in one form or another.

Many lawyers bill themselves as being the “shark.”  Despite having good success throughout my career with extensive litigation experience including winning cases in federal courts, appellate courts, and state courts, certain clients simply do not see me as a “shark.”  I wondered if I was too down to earth.  I considered perhaps changing my approach to become more aggressive or to be perceived as more aggressive.  In short, I had a rough night’s sleep weighing these concerns in my head. And then I had an epiphany…

What You Really Need is a Dolphin

In a divorce, you may think you want a shark, but often what you really need is a dolphin.  It is said that dolphins can act as life-rafts and help distressed humans back to shore.  Moreover, it is said that dolphins can effectively fight and often defeat sharks when necessary.  Although dolphins may not go looking for unnecessary fights and may favor efficiency, when the stakes are high dolphins do what is necessary.  Sharks may be indiscriminate in what they eat, dolphins are calculated and precise.  Sharks may eat their own, dolphins do not.  That night I realized as a lawyer I may be more of a dolphin than a shark, and I further realized that is ok.  Besides, I am who I am. I can no more will myself to be a metaphorical shark that a real dolphin could will itself to become a shark in the ocean.